The headline picture is randomly selected from 10 possibilities. Click 'refresh' to select another.

23/11/05 - Yet another livery variation has been introduced on Volvo B10BLE 2807, in this case sea green & mint, no company colour, but with the front in Metro colours.

16/11/05 - Deliveries of Volvos continue at a rapid pace, with up to 2906 at least in service. Older 2949 is the latest to gain Metro colours. B10BLE's 2791-4 should also be properly repainted soon, losing the vinyl livery application which was rapidly applied last year.

07/11/05 - Not previously mentioned is that Volvo 2980 has a mega-rear advert for energy effieiency. 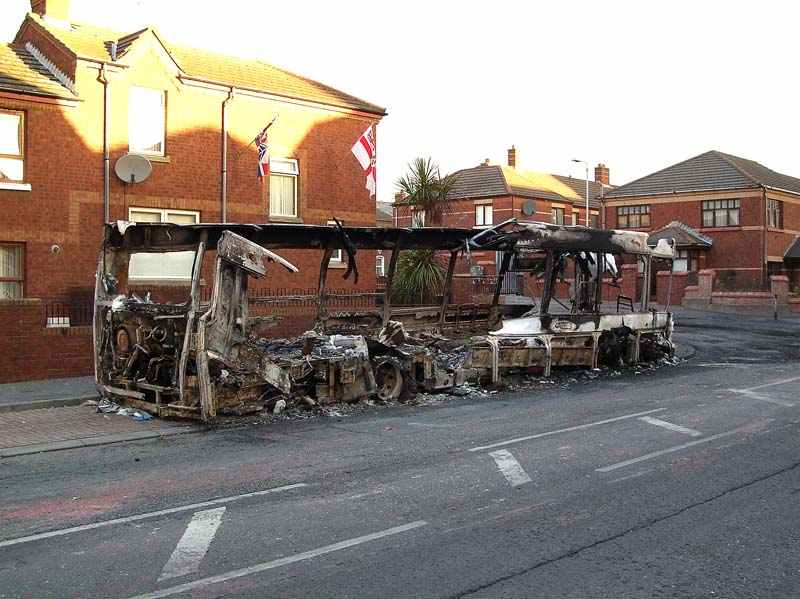 14/09/05 - Scania 803 was the first of these vehicles to be maliciously destroyed (at Cambrai Street on Monday night).

12/09/05 - With the widespread civil disturbances in Belfast at the weekend Cityliner 2669 was destroyed at North Queen Street. 1470 was also hijacked but recovered. 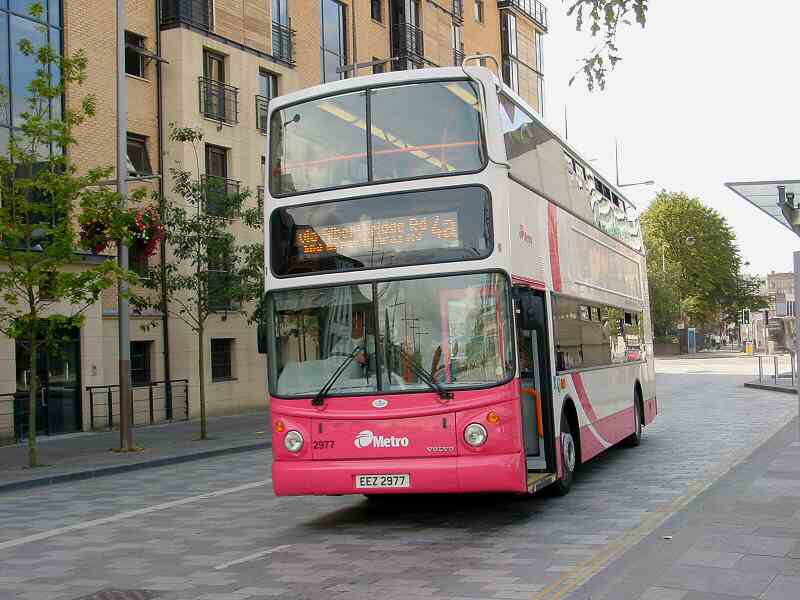 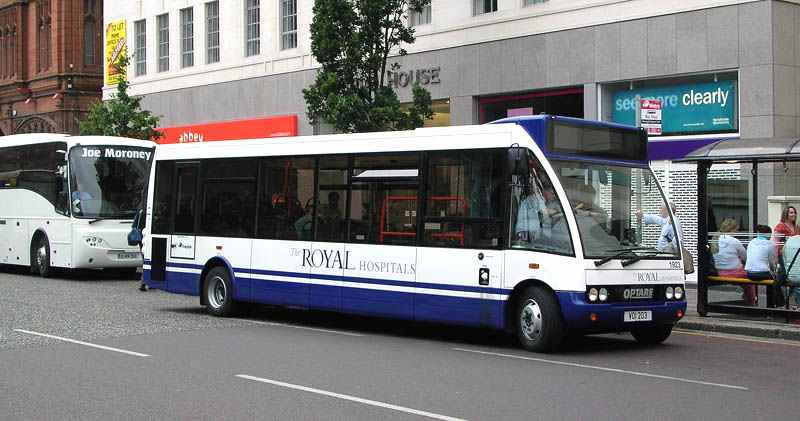 31/08/05 - Scania 785, which was the last green one, is now painted in Metro colours. New Volvos 2976/7/8/9/81/2/3/5/6/90 are at Dennisons; their entry in to service will be slightly delayed due to difficulties getting PSV dates. As with the Solos these buses feature improved seating over eralier deliveries; in this case the seats are of the style used in the reseat of the MkIII Goldliners. Another route variation to be introduced tomorrow on the Falls Road corridor is 10H Oakhurst (Black's Road via Stewartstown Road), whilst the Malone service (8A/B) is being increased from 6 to 8 buses per hour. Electronic destination displays are now being altered to show the route suffix letter in lower case to avoid confusion between 'B' and '8' in particular. Dart 626 has indeed been rejected and arrived back in Belfast today with Tiger 2628 being collected and with 2603/20 to follow. Former Neoplan 2009 is now overall magenta with a grey front and is awaiting the application of new vinyls for its continuing role as the education unit.

23/08/05 - Tiger/N-type 2625 is also on it's way to Lough Swilly joining 2626 there. At least 3 of the latest batch of double deck Volvos has arrived at Dennisons for PDI, with another 6 to follow by the end of the week. A service revision from 1st Septermber sees the 64 service to Downview extended to Gray's Lane, AbbeyCentre and Carnmoney (Fairview Road) as route 64A. This operates half hourly Monday - Friday only.

15/08/05 - Enviro demonstrator 2027 was returned to Alexander Dennis Ltd on 27th July. Scania 741 is another repaint to Metro livery, whilst 2663 is now in blue for transfer to Ulsterbus. Only 14 of Cityliners (of the 14xx batch) should remain here once current new bus deliveries are complete; it is expected that up to 8 of the next batch of Volvo B7s should be available by the start of the new school term in September. Darts 642/6/51 should transfer to Flexibus to replace older minis. Former RELL 2457, previously with BRA has gone to the Northern Ireland Fire Brigade as a training vehicle.

05/08/05 - Volvo B7's 2927 (HCZ 9927) was completely destroyed last night after being hijacked by rioters. It is the first of the new generation of double deckers to be destroyed, and as can be seen from Paul Savage's photograph there is very little left to salvage !!

24/06/05 - The next batch of vehicles to be painted in to Metro colours are the TCZ group of Volvos, with 2941 being the first done. More recent rear-end adverts are Cityliner 2673 for the NI Blood Transfusion Service and Volvo B7 2962 for W5. 3 Optare Solos from the current order of 60 are due here, and should be used on the Royal Hospitals service 95 as well as the remaining Easibus routes. 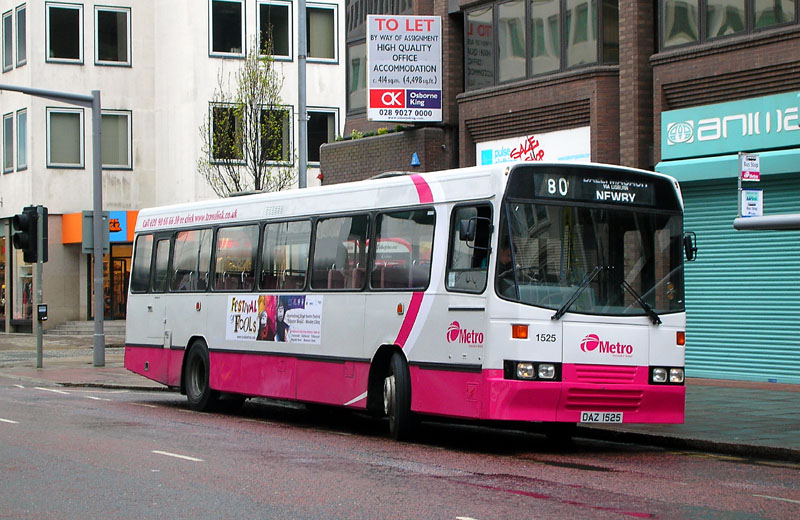 01/04/05 - Translink have announced that Metro vehicles 2966-2975 are to be fitted with Dot-Matrix registration plates in place of the current plastic ones. When the registrations of the vehicles are changed yet again, the dot matrix can be re-programmed by the depot inspector if the bus is in it's depot, or if it is in service the driver will be notified by two-way radio and will key in the new registration immediately. Translink have appointed manager Mr Reggie Stration to take charge of the project. Mr Stration explained "The installation of the dot matrix registration plates will admittedly have a high initial cost, but this will be offset by the substantial saving arising from the end of the practice of constantly having to replace the registration plates and having new ones made". Mr Stration added that the numerous plates from previous registration plates had been offered to the Ulster Folk and Transport Museum but the UTFM had to decline the offer as they did not have enough wall space to display them all. The ITT is pleased to announce that at it's Bus and Coach Rally 2005, those attending will be invited to guess what registrations 2966-2975 will carry on the day of the rally. The prize will be the old registration plates from this batch of vehicles, though the ITT points out that the winner, in order to display them, will require more wall space than the UTFM !!

27/03/05 - Most, if not all, the surviving Citybus REs are believed to be bound for Lough Swilly. At least one of the UCZ batch of Scanias is now in Metro livery (796 or 7?), whilst Renown 2801 is now in the swoopless green colour scheme. 6 rear end adverts for Coors Beer are to be applied, 4 on double deck and 2 on single deck.

20/03/05 - A further 70 Volvo B7TL/ALX 400 double deckers have been ordered, with delivery commencing sometime around August. It is expected that at least some of these should go to Ulsterbus.

16/03/05 - Scania 743, Renown 2800 and surprisingly ex Ulsterbus B10Ms 1524/5 are the latest repaints in Metro colours, whilst 2803 is now in the swoopless scheme. RELLs 2532/48 have gone to Wealden and are belived to be amongst the last to go to this dealer. Dart 627 was inspected by Lough Swilly recently and it seems created a favourable impression.

01/03/05 - More repaints in to Metro colours are Ultras 2707/8 and former Ulsterbus Scania 744. This means that no Ultra's remain in the red/cream livery in which this batch was delivered (finally !).

15/02/05 - The registration of new Volvos 2966-75 has turned in to something of a saga. Originally to be registered BEZ 9966 etc, they were delivered from Falkirk earlier than originally anticipated and were given BEZ 6966 etc instead. However these numbers have been issued twice in error and hence the 10 will now be registered BEZ 7966 - 7975. 2969-71 should now be in service, 2969/70 at Newtownabbey and 2971 at GVS. 2972 will also go to GVS with the final 3 to Short Strand. 3 of the final 4 were still in Belfast Docks yesterday with the last waiting shipment in Stranraer. The vehicle changes of 7th March by and large happened with the following changes: Dart 624 remains in service at Short Strand; Cityliners 1404/5 are now at Short Strand, not Falls as previously advised. 1406/7, currently detaxed, are to be reseated as 1404/5, and will be used on rail replacement work on the Larne line. 2677 has returned to service in red/cream; these vehicles will not receive Metro livery. 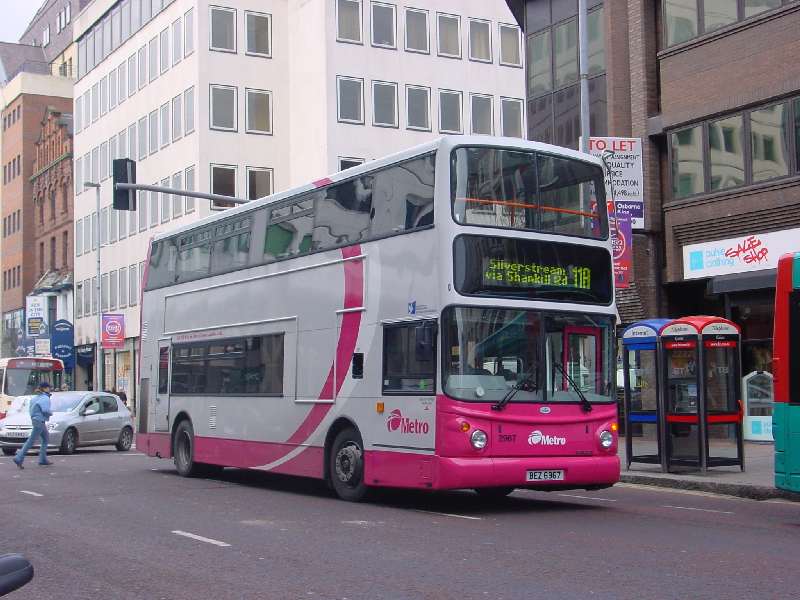 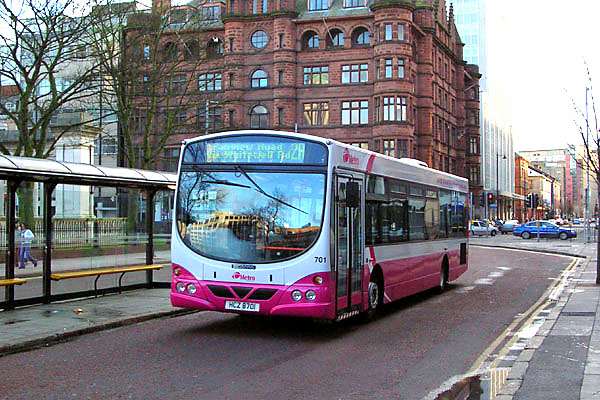 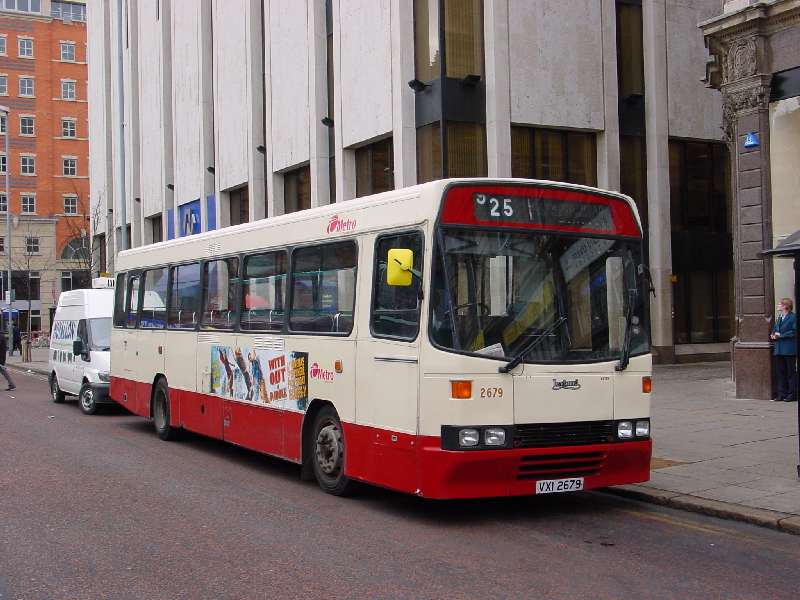 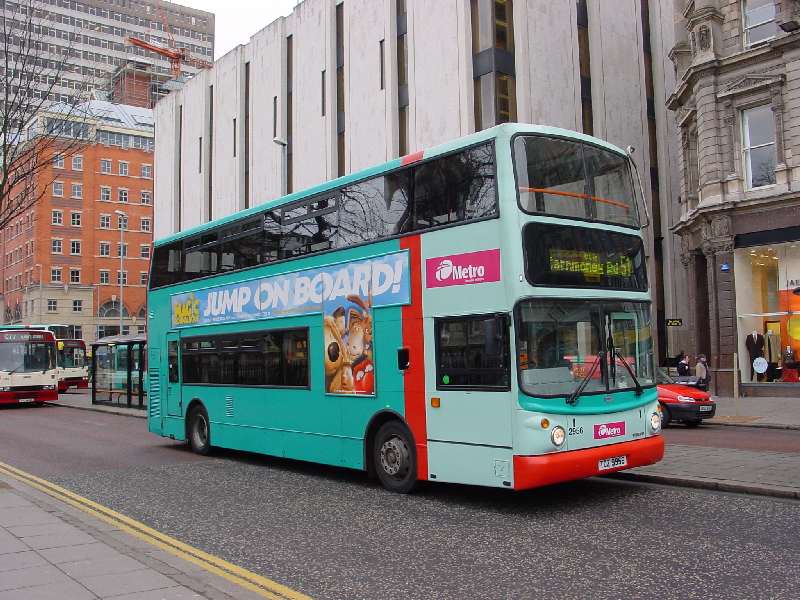 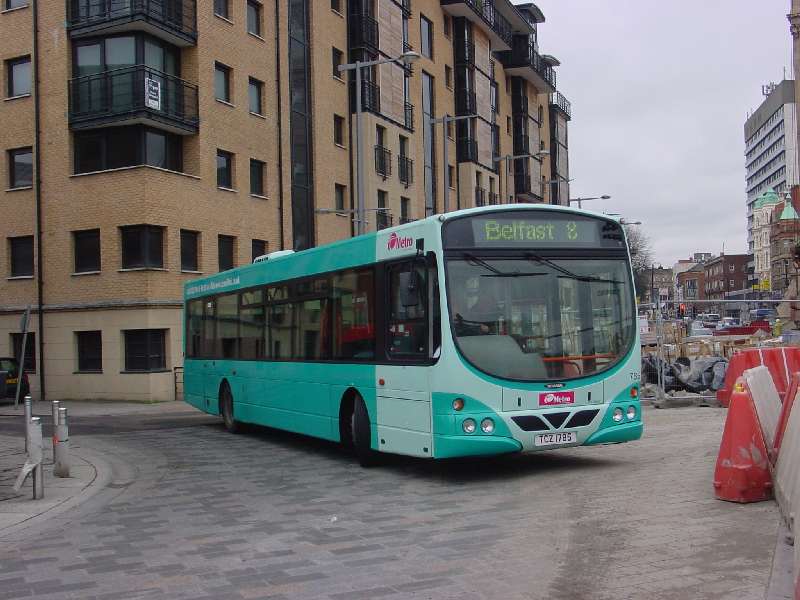 04/02/05 - It's all systems go for the biggest change in Belfast's bus services in 30 years, with the introduction of the new Metro system next Monday morning (7th February). Out go routes known to generations of Belfast folk, for example 33 Cregagh and 71 Malone, and in come 12 Metro 'high frequency' corridors. Monkstown, Belvoir Park, Tullycarnet and Ballybeen all join the Metro network, with some destinations disappearing completely (eg Mann's Corner) and other peripheral services being trimmed in frequency, all with a striking new 'pink' Metro colour scheme. One hopes that this is indeed a 'new start' for Belfast's bus services, which has suffered from years of decline and under-investment; if the new system fails to encourage growth it could well be the start of the end for public transport as we know it. Indeed inspection of the new timetables reveals that whilst some destinations receive a much better service, for example Ballybeen which goes from having 2 buses and hour to 6, many of the corridors see no improvement over the present level of service and some longstanding and seemingly well used links disappear completely, for example Mount Merrion Avenue - Cregagh Road. Creditably, on the core Metro Network, Sunday services revert to weekday routes with frequencies of up to 30 minutes. More worryingly, over 20 vehicles will be made redundant by the changes, which seems at variance with the 'better services for more people' mantra adopted by Translink. Critisism has already been levelled at the company regarding the availability of information regarding the new network; this has doubtless not been helped with the 'up to the wire' nature of the negotiations with staff regarding terms and conditions on the new network. So, what changes can we expect to see vehicle wise? Many vehicles already have gained 'Metro' names instead of Citybus, including a number of Cityliners, and the majority of the rest should be done over the weekend; all the electronic destination screens will be re-programmed for the new routes; surprisingly Dart 631 has been fitted with a roller blind display in place of it's previous Bright-tech unit. Ultra's 2705/33 and Renown 2792 are now in Metro livery; of the Ultras only 2707/8 remain in red/cream; Cityliner 2677 is expected to be the first Tiger to be done (currently Guinness advert). Ulsterbus Scanias 701/41-4/85 should join the metro fleet all at NB apart from 744 at Falls, together with B10BLEs 2808-11 at GVS and 2819 to Newtownabbey. These all should have their blue relief painted green. Also coming from Ulsterbus are Solo 1872 and B10Ms 1524/5, all to Short Strand. Darts 624/6, Cityliners 1406/7/2650 and N-types 2611/2/9/20/4/5/7/30/4 should all go to Reserve, whilst other moves should see 1404/5/2662/3 go to Falls, 2638/9/40/1/2 to Short Strand and 2647/78/9 to GVS. At least some of the new deckers should also hit the road, pending PSV and fitment of radios. 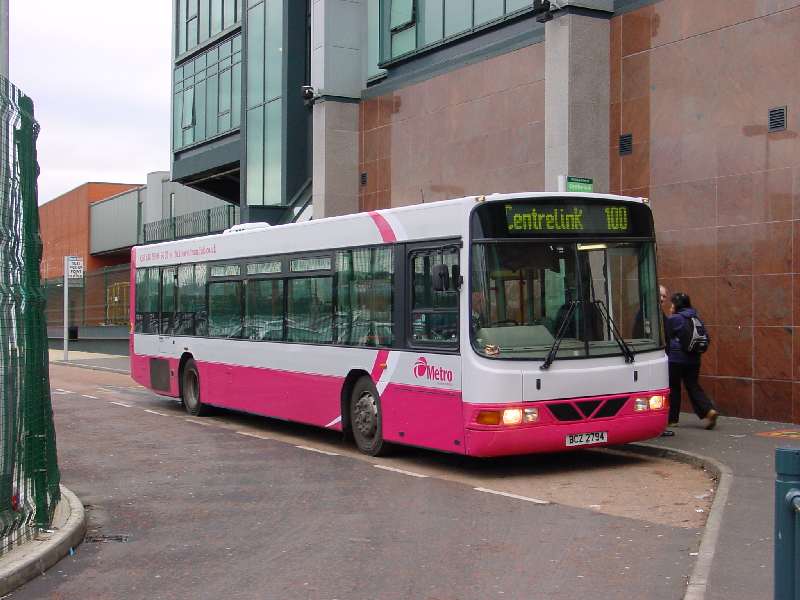 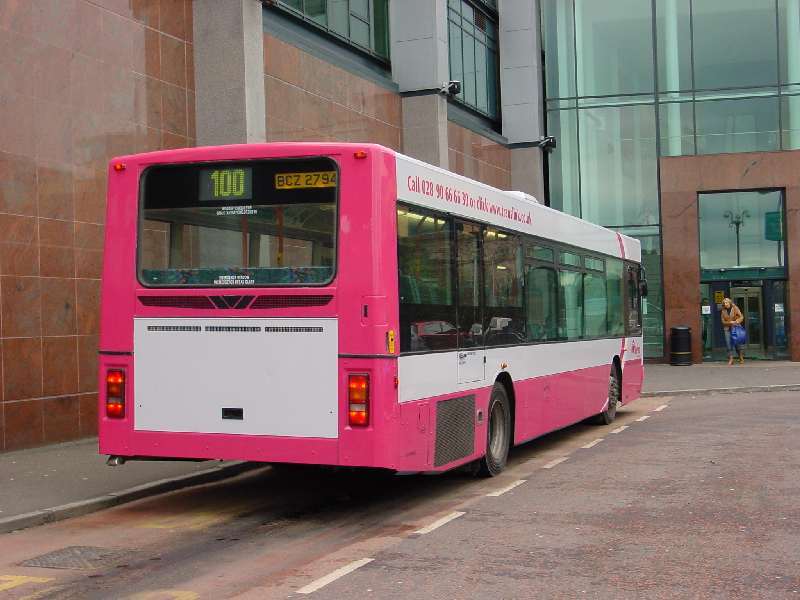 31/01/05 - 2967, the first of the latest batch of 10 Volvo B7TL/Alexander, has been delivered from Falkirk. It is the first double decker to be painted in Metro livery, and indeed is the first vehicle to carry this from new.

30/01/05 - Some Bus Shelters on the Dundonald (Metro 4) and Ormeau (Metro 7) corridors are now fitted with 'real time' information displays, although these are not yet in use.

26/01/05 - Renown 2794 is the first of it's type to appear in Metro colours, having previously carried a Marks & Spencer sponsored scheme for the Centrelink service. On these vehicles the magenta is carried up to the top of the skirt panels giving an effect rather more like the original nearside scheme on 2718.

12/01/05 - Tigers 2611/25 returned to service on 14th and 15th December to Falls and Short Strand respectively. Dart 631 moved from GVS to Falls on 1st December. The forthcoming 'Metro' revisions should see the following routes in operation: